Seakayaking – A Day in a Life of ADV Guide

Written by Stjepan Jureković on Feb 8, 2017. Posted in Water

Seakayaking is a joyfull activity that connects you with nature quite well. 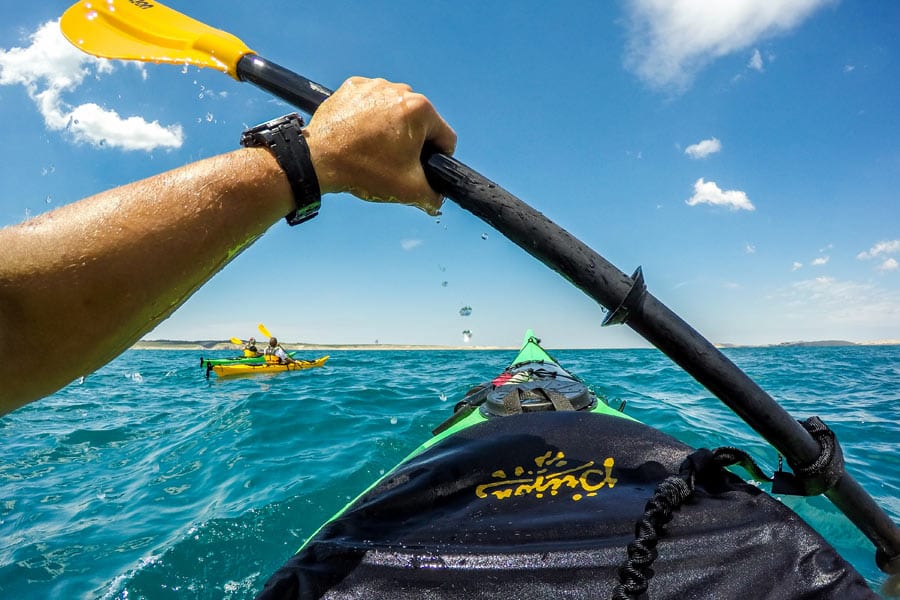 It can also turn an adventure quite easily. Here is a true story of a day in a life of seakayaker.

It’s late autumn now. As it’s getting colder and colder, from the warmth and comfort of my city apartment, I try to evoke the echo of summer back to my thoughts. And summer means – seakayaking!
I transcend back to August sometime, i believe the beginning of. I had a free day between tours and the idea was to scout some new locations with my kayak. Nothing special, just a circle tour around some smaller islands in a close area. It was a stormy night preceding.  Nevera we like to call it, when the clouds close the sky from all sides at once, bringing rain and nervous winds. Nature was trying to shatter my confidence about the trip. The tent was about to crush every ten minutes, and for more then a couple of times I changed my mind to go.
But the weather forecast was good. It should all clear out till morning.
And it was right.
When I opened my tent there was a beautiful summer morning outside. The air so bright, it seemed like a distant shore is at the reach of my hands. Just a few paddles away.
And the sea just perfectly still. Surfaces like a mellow mirror that calls you to draw the waves in it. I had a silent breakfast, a cup of coffee and a swim to shake my rusty bones. And then took off.
In an early morning, it takes longer to warm your muscles. Body is all tighten up. You literally have to urge him to push. So, the beginning is never smooth. But, you keep on breathing, deeply, and soon your body finds an inner balance. Paddling starts to follow the rythm of breathing. The sea doesn’t resist so much anymore. It all becomes one.
As the minutes pass by, the morning sun rises high, you leave a shore in a distance behind. The place you took off is now just a dot, an orientation mark. You have a whole day of seakayaking on your own. Just you and the nature. And nature is a cruel mistress for credulous. If you’re not credited to deal with it, she can twist you in a second.
I find myself well credited for I am aware of my exposure. The heating sun above my head and a maggot sea beneath.
But the morning sea is still, so while my body switches over to auto-pilot and continues paddling, the rest of me dwells deep into my thoughts. Thinking all kinds of stuff as the miles just went by. I already crossed the channel to a neighbour island and was now paddling along it’s coast to cross another one. 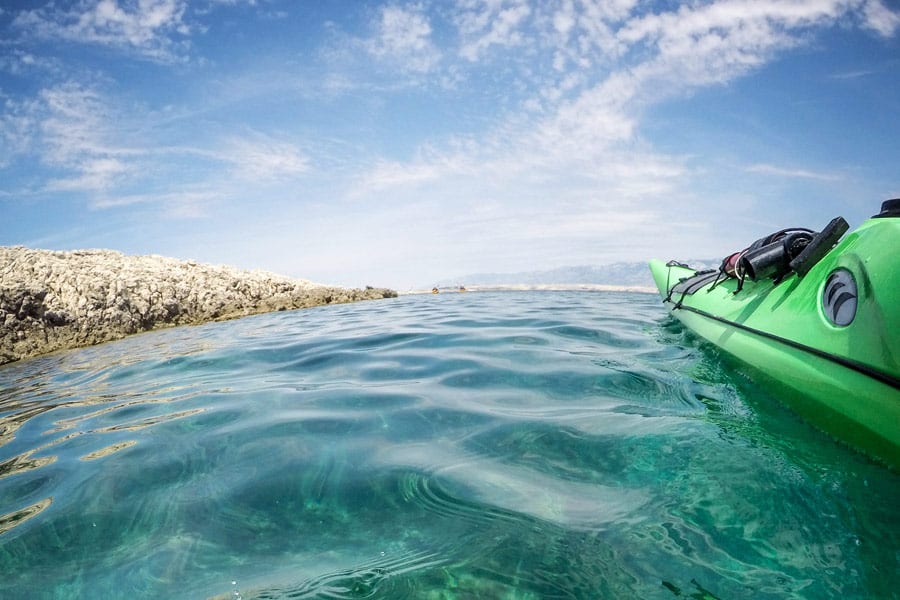 Seakayaking along the coast makes you feel secure and gives you the beautiful views you don’t have a chance to experience everyday.  But crossing the channel is always fun. You leave the security zone and till you get to the other side, anything is possible.
At that time it was all nice and easy, just cruising around islands. After almost fifteen miles of seakayaking, it was time to go back. The noon was long gone, the heat was at it’s peak, i felt like I needed a rest before a long way back. There were no clouds in sight, no wind blowing, I deicided to paddle a little bit more till I get to this deep laguna I knew of, very popular in nautic because it gives a shelter from a strong southern wind called Jugo. There is a nice beach bar in the shade and I had a beer in my mind.
As the cold beer glided down my dried throat, the wind started blowing. Yes, Maestral will rise in an afternoon – the bar owner told me. At this time of summer it’s normal for Maestral (refreshening northwest wind) to rise later in a day, but this afternoon it seemed like it’s going to be really strong. It’s time to hurry up and get back on the tracks. I still had this huge channel to cross on my way.
I didn’t feel the full strength of the wind while I was still paddling inside the laguna, but the moment I got out it became clear the whole meditation thing was over. The real seakayaking adventure is just starting!
Maestral comes from northwest blowing from the sea to the land. To get back where my tent was I had to paddle the same direction.
As I was at the far south side I couldn’t traverse directly, there was no other way but to paddle along the coast all the way to the far north. That way, when I finally start crossing the channel I’ll have Maestral blowing in my back and kayak following the direction of waves. It was a good plan. Exhausting, but good.
To paddle against the waves I had to cut each wave as it came my way. It might seem hard, but in fact, it’s much fun. When you’re going against the waves you are safe, your boat can’t flip over. It changes when waves start hitting you aside. Every wave, even the slightest one, can flip you over. 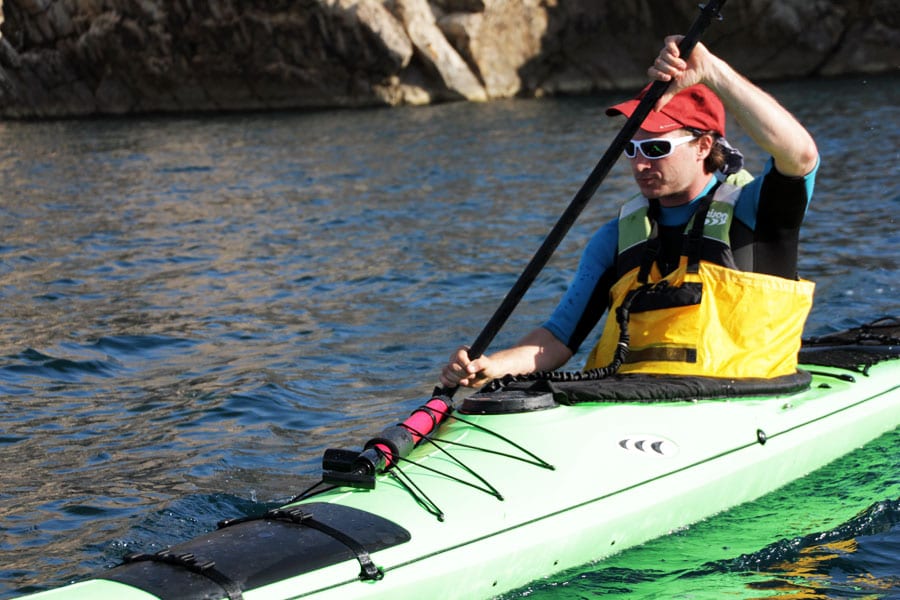 For some time, I managed to keep the wind in my back and  waves on my tail. I was doing pretty good. It was a game of staying calm. Prepare for next wave, overcome it’s hit, stabilise afterwards! Again and again and again. You have to keep on paddling, no matter what. Let your body follow the moves of the boat. Don’t shrivel. Again and again and again. Another wave. Then another one. And another one.
I was approximately 120 meters from the other coast. I was close enough to recognize a rock from a rock..  So, for a couple of miles I was winning and was convinced that I’m gonna make it for sure. Then, at one critical point, seemed like the waves started coming from all around. Like a natural trap I got in.
I managed to control first attack but also put the boat in an awkward position for the next one, coming from another direction. I hesitated for a moment there and flipped. Game over.
The waves were wild, so it was a mess to dive out in the first place. And to get back into to the cockpit…well, for me, it was impossible. I tried so many times. I wasn’t afraid, but I could hear myself breathing fast and short. Once I was really close to get back in, just to flip on a last move. Other option was to drag a boat away to the coast, but the waves would only crash us to the rocks. It was no use. I had to get back in.
Turns out I was not alone. While I was still paddling trough the waves there was a fisherman boat in a distance. I was too ashamed to call them out for a help. Instead, they drove closer on their own. For them, it was clear that I needed help. So, they offered it and I accepted it with thrill.
They dropped me up to a nearby village. I could handle my boat from there and dry my stuff. Everyone in the village looked at me like I was from another planet. I myself felt like I just got out from the battle. But, in the battlefield called Adriatic, there is always some gentle soul to offer their help. 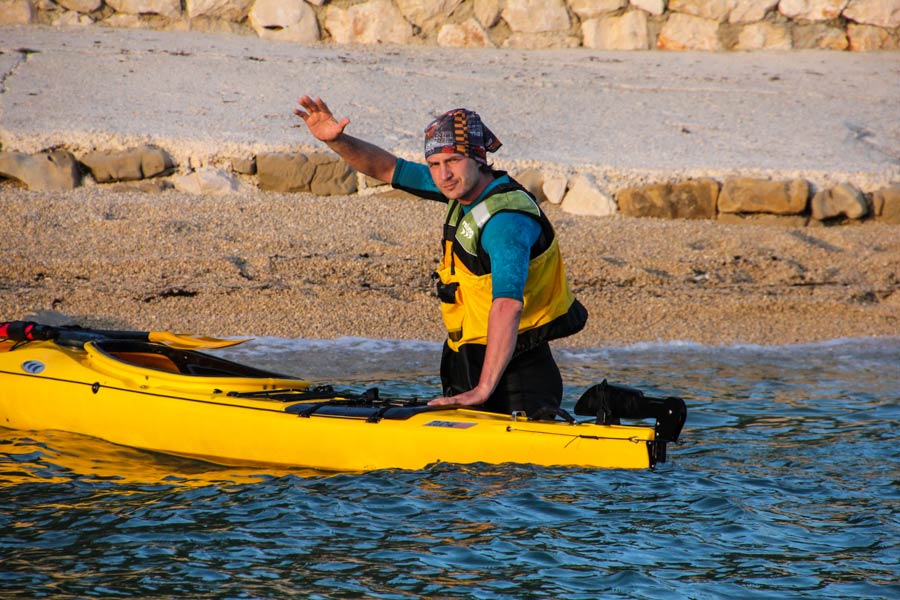 Tags: Fun things to do in Croatia, Seakayaking Croatia